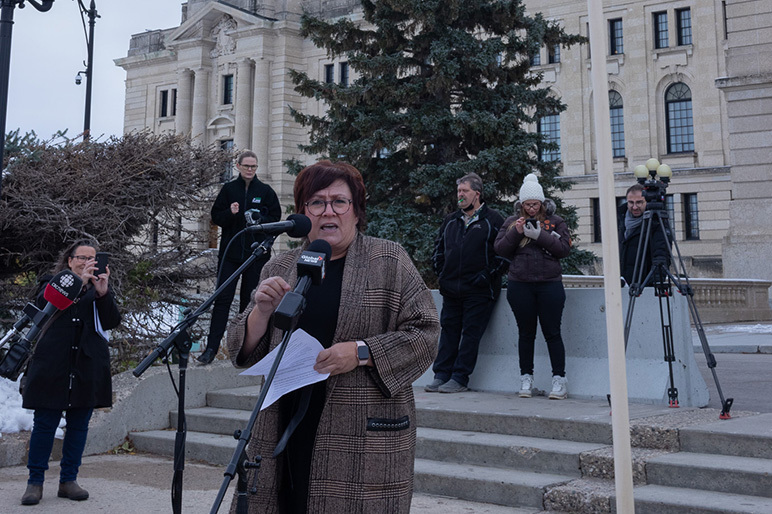 Photo: SGEU President Tracey Sauer speaks at a rally organized by the Saskatchewan Federation of Labour on October 27, 2022.

Today, the Saskatchewan Government and General Employees’ Union (SGEU) is bringing the Save Our Stores (SOS) campaign directly to the government. Hundreds of petitions calling for the government to stop the sell-off of Saskatchewan Liquor and Gaming Authority (SGLA) liquor stores will be presented during the legislative session today while SGEU members watch from the gallery.

The SOS campaign mobilizes and encourages Saskatchewan residents to take action to save our province’s remaining 34 public SLGA retail stores from being sold-off by the government. Over 1500 letters of concern from the public have already been sent directly to SLGA Minister Lori Carr.

“There is simply no logical reason behind the government’s decision to close SLGA retail stores,” said SGEU President Tracey Sauer. “The stores bring in much-needed revenue that helps fund important government services like health care, education and highways – and they provide good jobs for residents in communities across the province.”

The decision to privatize the remaining public liquor stores was announced as part of the Speech from the Throne on October 27, 2022. Ironically, the Throne Speech focused on ‘growth that works for everyone’ while simultaneously including an announcement that will result in almost 400 people who work at SLGA stores losing their jobs. The move will also directly and indirectly impact the communities these employees live and invest in. Furthermore, privatizing the public liquor stores will cause the loss of millions of dollars in government revenue that funds public services like health care, education and highways.

“For a government that brags about offering prosperity and growth for everyone, this is certainly no way to invest in Saskatchewan residents and communities,” said Sauer. “Selling these liquor licenses to private operators will mean most if not all of them will go to large, wealthy corporations who will funnel their profits out of province and provide low-paying jobs for their employees.”

The SOS campaign aims to address common misconceptions about what privatizing the public liquor stores would mean and where profits would be directed, inform Saskatchewan residents about the impacts of selling off the stores, identify the real people and life-changing implications of the decision, and motivate Saskatchewan residents to take action.

People in Saskatchewan who are interested in saving our SLGA stores can sign up to volunteer for door knocking or phone calling, send an online letter to SLGA Minister Lori Carr, and share the campaign posts on social media using the hashtag #SaveOurSkStores.

Details about how to Save Our Stores are available at sgeu.org/sos.

Following today’s Question Period, SGEU President Tracey Sauer and SGEU Vice-President Bob Stadnichuk will be available in the rotunda to speak with media.

The Saskatchewan Government and General Employees’ Union has been working together for Saskatchewan since 1913. Today, SGEU represents 20,000 members in six sectors across Saskatchewan. Visit sgeu.org to learn more.