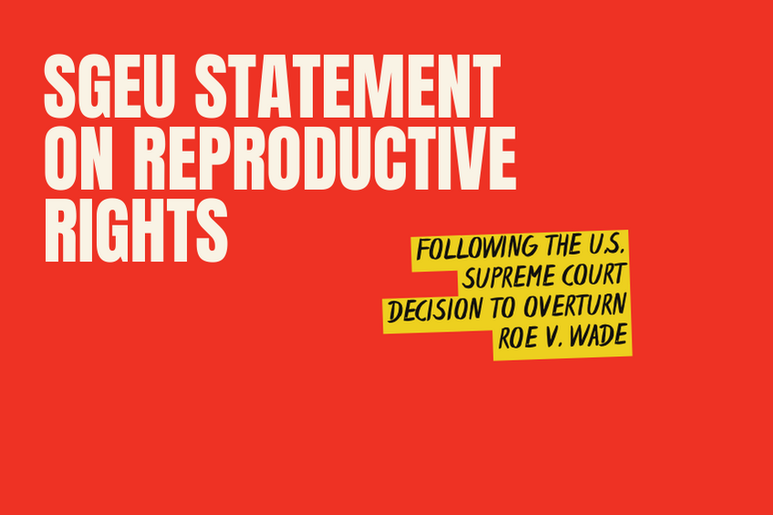 Last week, the Supreme Court of the United States overturned a landmark precedent set 50 years ago in Roe v. Wade and ruled against the constitutional right to access safe and legal abortion care. This not only jeopardizes the reproductive rights of millions of Americans but will have a ripple effect on other countries including Canada because the anti-choice movement is vocal, organized and well-funded.

SGEU stands in solidarity with our American neighbours who have been stripped of their rights and democracy. The situation in America shows us that we must continue to be vigilant and counter those with the power to limit or deny access to abortion in our own country and province.

SGEU's values of dignity, equality, justice, and diversity inform our commitment to continue fighting for fairness for all members and every resident of Saskatchewan, which includes equitable access to abortion and reproductive health services. We will also continue to fight to ensure parents receive the support they need to raise healthy children by advocating for a fair minimum wage, improved access to affordable child care, increased funding for education and health care, and workplaces that allow employees to balance work and family responsibilities.

The fight for reproductive rights has continued for centuries and is still ongoing in many jurisdictions. In Canada, abortion rights were not won overnight; abortion services were decriminalized in 1988. However, accessing abortion services in Saskatchewan is still not easy for many, including those living in rural and remote communities, people with disabilities, youth, racialized populations, and those living in poverty.

Polling has shown that approximately 70 per cent of Canadians are pro-choice. Reproductive health and rights impact us at home but they also impact us in our workplaces. Pregnant workers are often treated unfairly, young workers face discrimination because employers are concerned about them taking maternity or paternity leave, and workers who take leave often lose pension contributions or other benefits.

SGEU stands in solidarity with all those whose rights are under attack as a result of the overturning of Roe v. Wade.