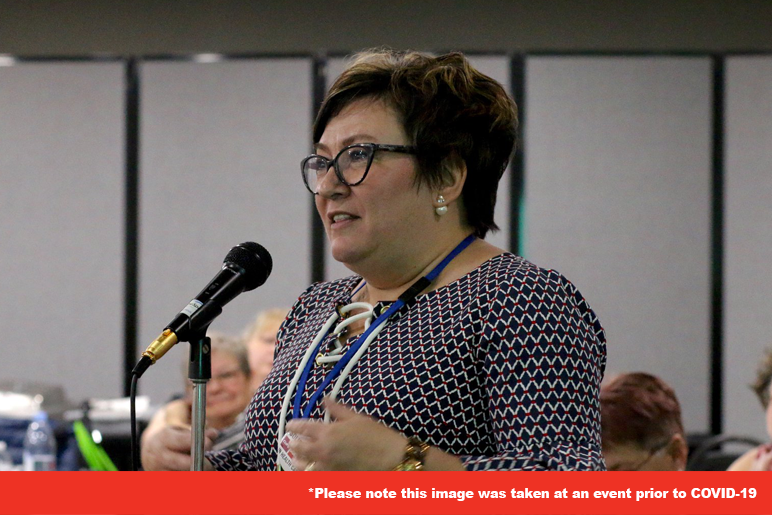 REGINA – Tracey Sauer was elected as SGEU’s new president at the union’s first-ever virtual convention, which took place from April 29 – May 1, 2021.

“I am honoured to have been elected to serve as SGEU’s president and to lead the continued work of our union to support members and be their voice for social change,” said Sauer after the election results were announced. “I believe that by working together, we can build a stronger labour movement across Saskatchewan.”

Sauer has been a union activist and outspoken advocate for health care workers for over 35 years, starting out as a steward in her workplace before going on to hold many roles in the union, including being on the SGEU Provincial Council for 19 years and on SGEU’s Administrative Committee as the NUPGE Vice-President for five years. She comes from SGEU’s Health Sector and has served for the past two years as the Health Sector Chair and the Health Providers Bargaining Unit Chair. She also spent many years on the Health Providers Negotiating Committee and is a graduate of the Harvard University Trade Union Program.

“As a union representing 20,000 working people across Saskatchewan, I believe we need to rally our members and work to build strong solidarity across sectors,” said Sauer. “SGEU has always been a politically active union, and I’d like to send a message to our government that we are ready to stand up for our rights and fight the longstanding injustices to workers that have been highlighted throughout this pandemic.”

“I would like to thank outgoing president Bob Bymoen and secretary-treasurer Roseann Strelezki for their leadership of SGEU over the past years,” Sauer added. “Their passion and dedication have shaped Saskatchewan’s labour movement and our union, and I’m honoured to pick up the baton and continue building on their important work.”

Sauer is also known for being the first woman elected as the Mayor of Kelvington (2016-2020), where she currently resides. She is the second woman to be elected president of SGEU, following in the footsteps of former president Barbara Byers.

Other officers elected at the convention include: