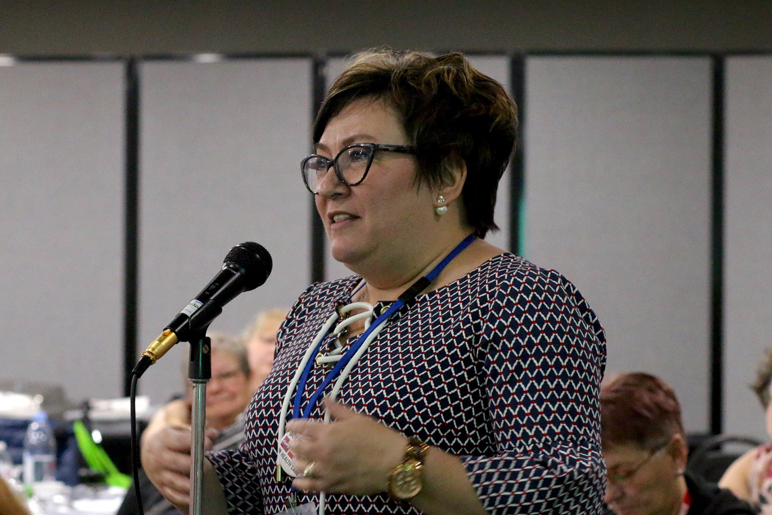 Get to know Tracey Sauer, our SGEU President

Hello, I am Tracy Sauer, President of SGEU. I come from Kelvington, Saskatchewan, where I was the former mayor of Kelvington prior to becoming the President of SGEU in 2021. I have been re-elected in 2022 for a two-year term, which I'm very pleased about. I’m proud and happy to be your President.

I was the Vice-President of National Union of Public General Employees—or NUPGE, as we call it—for five years. I have been on SGEU’s Provincial Council since 2002 as well as Health Sector Chair, Health Sector Vice-President, and Bargaining Chair for the health providers. I have been on the Long-term Disability Supervisory as well as Chief Steward.

Anything that I could do to be involved with SGEU over the years, I happily did, and I'm so proud to be a part of SGEU.

Anything that I could do to be involved with SGEU over the years, I happily did, and I'm so proud to be a part of SGEU.

When did you know that you were interested in social justice issues?

I was eight years old when I first realized that I could play a role in social justice. I come from a family of 14 children, and in those days, in our family, boys had a higher importance than girls, which we know back in the day, as they say, happened quite frequently.

My mother looked at me and said with her look like Tracey. And I was an impish little eight-year-old girl, long straggly hair, who just said no, I will not go unless he has to go too. So, I kind of won—we both had to go to bed. But that was the first time I knew that at eight years old I could stand up for my rights. I really, really want people to realize it doesn't matter what age you are. You can stand up for yourself and for others.

When I first got involved with the union it was in 1987 and it was actually with CUPE. We were newly unionized, and I had a senior employee come to me and say, “you're young—we need young people involved. Would you be the treasurer of our local?” I got involved then.

I was actively involved with CUPE until an amalgamation happened in the Health Sector and we became SGEU. SGEU opened their arms to me—they were so open—and said we need you on our team. In 2002, at my first SGEU Health Sector annual general meeting, I was nominated and elected to be on Provincial Council.

How did you decide to become a steward?

I became a Steward because I was being harassed in the workplace. I did go to a Chief Steward about the harassment, but she didn't want to do anything because it was a management member that was doing the harassing and there was some intimidation there. The Chief Steward said I’d have to figure it out because she didn’t want to get involved. So, I grabbed a Steward and I said you're coming with me. I went and talked to the manager and said this is what I've been told that you said, and it has to stop. We had a great conversation and got along great after that.

Later, I became the Chief Steward and had a great working relationship with the management from there on. They knew that if I heard a problem, I would approach them in the proper way and if they knew of a problem they would come and approach me. My roles within SGEU evolved from there and eventually it led to me becoming the President of SGEU.

Can you share more about how union reps and management can have a collaborative working relationship?

I've had such great managers and they asked my opinion, allowed me to participate on committees and give them my input. And that's what being part of a union is about. It's about that collaboration—working for a better workplace, right?

It's all in how you control your own emotions in those situations, right? There is a time to be angry and to be forceful. But you have to know when to be like that and not have that be your first instinct all the time. You have to defend your members, you have to defend yourself, but that doesn't mean chopping somebody off at the knees in order to do it.

How does SGEU support stewards and help them grow their skillset?

Having the proper tools to be a Steward is so important and that's why SGEU is so lucky to have our education department and Dipa Bharadwaj—everybody knows and loves Dipa—and to have those tools and connections so that you have somebody to go to when you have those questions. With building education programs, there’s consistency. It's also helpful because when you're dealing with management, some of our larger centres, then they know they're going to get a consistent approach, so it's really important and benefits everybody.

What are you looking forward to as President over the next couple of years?

As the President of SGEU, I am really looking forward to the strategic plan that we have just started to initiate.

As the President of SGEU, I am really looking forward to the strategic plan that we have just started to initiate.

It's amazing to me to have the collaboration of not only our Vice-Presidents and Provincial Council; we're starting to work with our standing committees, and also with our directors and staff. All of us are involved in the strategic plan to move forward and to keep it consistently flowing. A strategic plan, as they say, expires the day you've developed it, so it's a continuation of what we need to do.

And the thought of getting out there, meeting members where they work, that's what I'm most excited about. We have so many great members and so many great occupations that are under SGEU, and we need to celebrate the good that our members do. Getting out there where they are and talking with them, seeing their workplaces—I'm just over the moon, actually, to think about how much we can do and build and work together and watch our union grow and evolve and be prominent within Saskatchewan. Not only for our members but for the people of Saskatchewan. Our SGEU members are so proud of the jobs and the work they do, and I want to celebrate that with them.

How can members be involved and why is member involvement important?

As a new member, getting involved with our union is very important. Lots of people feel that unions are no longer relevant today. Our union is as relevant as you want to make it. In our union we will always be there to support you, and the best way for us to support you is for you to know and understand what your rights are within your collective agreement and who you should be talking to for help.

There are so many great opportunities for you to join with other SGEU advocates and members. For new members, you need to learn your passion. What is your passion? What do you want to do? What do you want to do to be involved with SGEU? We have many standing committees which may suit your interests, and which should help you grow and learn. But most importantly, you could be a Steward or a Chief Steward. You could be on your negotiating committee. You could be the deciding factor of what happens with your collective agreement. It is so important for you to be involved.

This is what SGEU is. SGEU is our members. You are the ones who build SGEU. That is why it's important for you to be involved.

This is what SGEU is. SGEU is our members. You are the ones who build SGEU. That is why it's important for you to be involved.

Do you have a highlight out of your time with SGEU?

Some people may think that your highlight is becoming President or when you're elected for positions that you're so very proud of. I'm very proud of being elected to be the Bargaining Chair, to be my local chair, too, the Vice-President of NUPGE and the President. It all makes me very proud and they are all big highlights.

But truthfully, the highlight is helping a member. When your members are at their worst and you can make them better, that is the highlight. When you have a member who’s really struggling, and you have been their only hope and you've been able to help them get through some very difficult times, that's the best.

I would like to welcome members to look at our website, join our social media channels (Facebook, Twitter, Instagram), look at the education sessions that are upcoming, and find a way to be involved with our union that works for them. And members can always reach me if they wish by using the Contact Us form.

This interview has been edited and condensed.