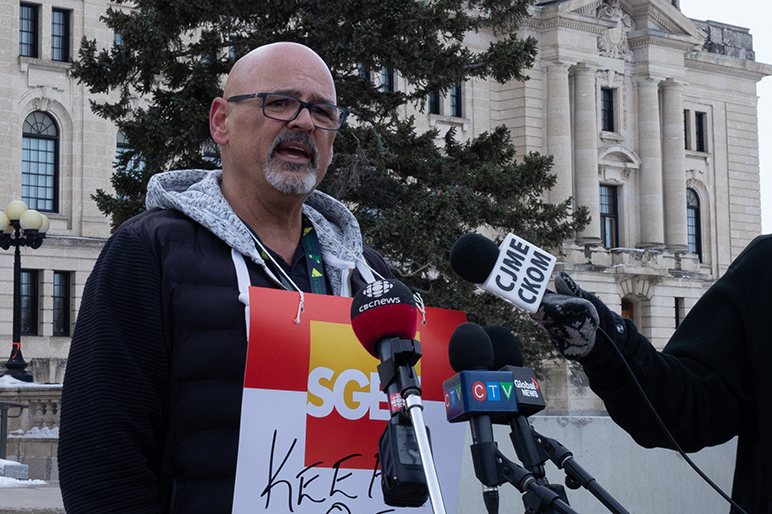 REGINA, Sask.—Members of the Saskatchewan Government and General Employees’ Union (SGEU) are in Prince Albert today, seeking support for the Save Our Stores campaign that opposes the provincial government’s recent decision to close all remaining public liquor stores in the province, including the busy and profitable store in the city.

“There is simply no logical reason behind the government’s decision to close Saskatchewan Liquor and Gaming Authority (SLGA) retail stores,” said SGEU Vice-President Bob Stadnichuk. “The stores bring in much-needed revenue that helps fund important government services like health care, education and highways – and they provide good jobs for residents in communities across the province.”

The provincial government announced in its October 26 Throne Speech that it will cease operations of all 34 remaining SLGA stores no later than March 31, 2023. The retail permits associated with the stores will be sold through a public online auction in early 2023.

Public liquor stores have remained profitable even after the introduction of private liquor retailers. SLGA employees have offered suggestions for ways to increase revenues by offering features such as the sale of snacks, mix and ice; additional product selections; extended hours; and walk-in coolers – all things that private stores are allowed to do. The government has opposed any such moves, creating an unlevel playing field for public stores to compete with private stores.

“Selling these licenses to private operators will mean most if not all of them will go to large, wealthy corporations who will funnel their profits out of province and provide low-paying jobs for their employees,” Stadnichuk said. “For a government that brags about offering prosperity and growth for everyone, this is certainly no way to invest in Saskatchewan residents and communities.”

“This is a one-time cash grab that will have negative long-term consequences for individuals and communities, as well as government revenues,” Stadnichuk added. “We’re here to let the MLAs in Prince Albert know their government has made a wrong-headed decision. It’s not too late for Alana Ross and Joe Hargrave to stand up for Prince Albert by telling Premier Scott Moe and SLGA Minister Lori Carr to keep the stores open.”

SGEU’s SOS campaign has already generated a tremendous amount of public support for keeping SLGA retail stores open. The campaign involves a petition to be presented in the legislature; information with a call to action distributed through leaflet drops, phone calls and door knocking in communities across the province; social media posts (#SaveOurSkStores); and an online letter-writing campaign targeted at SLGA Minister Lori Carr.

More details about the downside of store closures and links to the petition and letter-writing campaign can be found at sgeu.org/SOS.

The Saskatchewan Government and General Employees’ Union has been working together for Saskatchewan since 1913. Today, SGEU represents 20,000 members in six sectors across Saskatchewan. Visit sgeu.org to learn more.