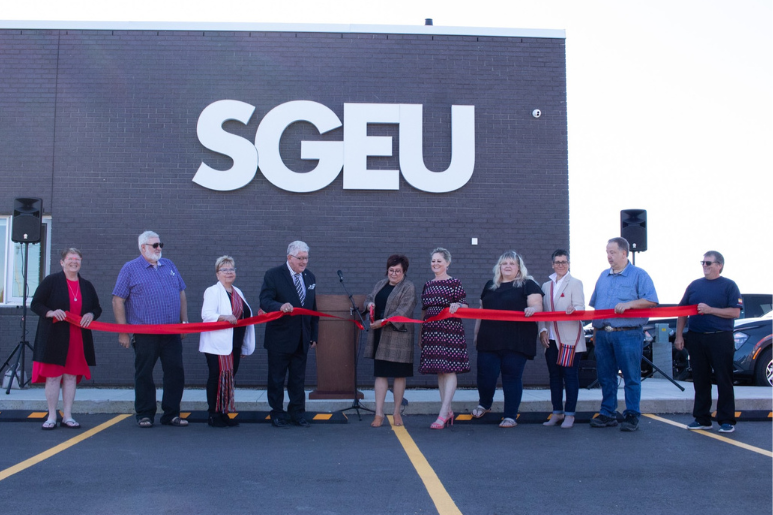 The day’s events started off with a blessing from Métis elder Debbie Smith, followed by remarks from SGEU President Tracey Sauer and greetings from Prince Albert Ward 4 Councillor Don Cody. Afterwards, visitors enjoyed a barbecue meal and tours of the new space.

Sauer was excited to see so many members come out to celebrate the new building, which she described as a symbol of hard work and collaboration.

“Yesterday marked one year since we first broke ground for the project … but the actual plans for this space began years earlier. Before it was a proposal or a concept, it was a conversation,” explained Sauer. “So, to me, this building is a testament to what can come from small beginnings.”

The staff and facilities in the new space will serve approximately 5,000 members—over 1,000 of which work in Prince Albert.

Sauer stressed the significance of the new building not just to union staff and members, but to the local community. She noted that the grand opening in Prince Albert was one stop in a larger tour of communities in Northern Saskatchewan that she is on this week, accompanied by SGEU Indigenous Vice President Hali Topinka and Retail Regulatory Vice President Ralph Rathgeber.

“This building stands for all of the great things that come from working together, but it is also a representation of our commitment to serving this community,” Sauer said. “It has been a wonderful experience getting to meet and connect with so many great folks who live in Northern Saskatchewan, and we are so excited to be putting roots down here in Prince Albert with our own building.”

President Sauer was in Buffalo Narrows and La Loche earlier this week, where she, Topinka and Rathgeber greeted members at SGEU workplaces. They also visited Twin Lakes Community School and Ducharme Elementary School to read to students and present donation cheques.

Tomorrow they will be in La Ronge to present a cheque at Pre-Cam Community School, chat with SGEU members and meet local officials.

Each school received $3993.49 toward their student meal programs.

“One of our union’s constitutional values is learning. It’s important that we contribute to programs that help equip students with what they need to learn,” said Sauer.

“We want to make Saskatchewan better, not just for our members, but for everyone.”

With offices in Regina, Saskatoon and Prince Albert, SGEU represents 20,000 members in six sectors across Saskatchewan.