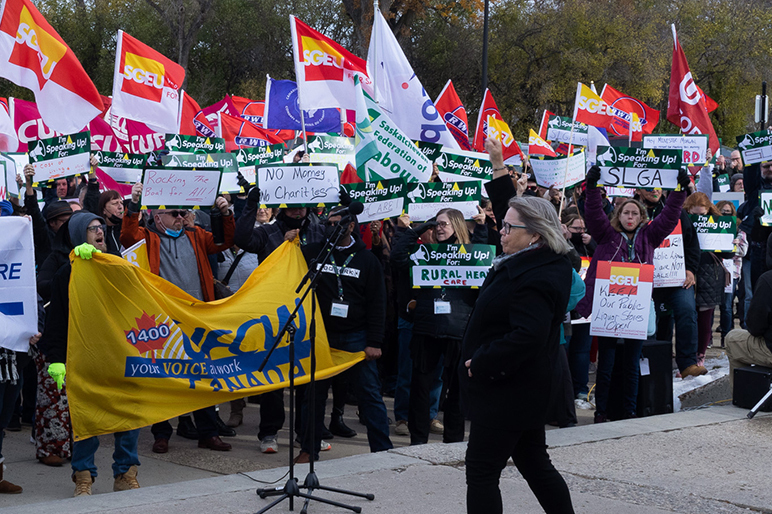 Photo: Saskatchewan Federation of Labour President Lori Johb leads a rallying cry of solidarity at a rally at the Legislature on October 27, 2022.

The Saskatchewan Federation of Labour and Saskatchewan’s labour movement stands in solidarity with SGEU members and is firmly against the Saskatchewan government’s decision to privatize the remaining public liquor stores in the province.

The 400 SGEU members who work in Saskatchewan’s public liquor stores across the province are professional and knowledgeable, and many have dedicated their careers to working in the public service at these stores. The stores provide living wages and benefits which SGEU members in turn use to support their families and the communities they live in.

By privatizing our public liquor stores, the Sask. Party government is turning that income and those profits over to the private sector and large corporations who will take profits out of province to benefit their shareholders instead of the people of Saskatchewan. This is a decision made based on a misguided ideology from a government that is convinced that the private sector can deliver better services—something that time and time again has proven not to be the case.

The proposed privatization of our public liquor stores is just the latest attempt by the Sask. Party to sell off public services that belong to the people of Saskatchewan. In 2017, when the Sask. Party passed legislation that would allow them to privatize our crown corporations, Saskatchewan’s labour movement fought back, and won when the legislation was eventually repealed. Now, we are fighting to save our public liquor stores. These stores belong to us, the people of Saskatchewan, and we urge everyone to take action. Visit www.sgeu.org/sos and send a letter to Minister Lori Carr and volunteer with the Save Our Stores campaign.

Together, we can stop privatization and save our stores.