'Spit at or punched or poked': Sask. health staff top the list of violently injured workers 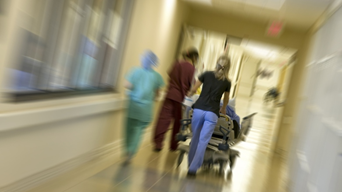 More health workers in Saskatchewan are being compensated for violent on-the-job injuries than police or corrections officers, according to newly released statistics from the province's Workers' Compensation Board (WCB).

According to the board's statistics on accepted claims, the top three groups of occupations that were prone to violent injuries between 2012 and 2016 were:

Nurse aides, for example, were compensated for violent injuries at nearly three times the rate of security guards in 2016.

Patients and residents of health care facilities, meanwhile, are the most frequent inflictors of violence — ahead of dogs, prison inmates and students, the statistics show.

A spokesperson for the Saskatchewan Union of Nurses was not available for comment.

Workers in some fields don't even report their violent injuries, said Sandra Cripps, the CEO of the Saskatchewan Association of Safe Workplaces in Health.

"Many have kind of normalized being kicked or spit at or punched or poked or whatever it may be, and it's just not acceptable," said Cripps.

"No one should have to go to work feeling that they're being threatened by violence or an aggressive act," echoed Shelly McFadden, the WCB's director of prevention.

The statistics have spurred both organizations to partner on a province-wide effort to reduce the number of violent incidents in the health care industry, where nine per cent of time-loss injuries from 2012 to 2016 were caused by assaults, violent acts, attacks and harassment.

"When you're dealing with patients who have a crisis and they're requiring care, they're also at their most vulnerable point. You're not sure what kind of a reaction you're going to get from patients," said Cripps.

The initiative, called the Provincial Violence Prevention Framework, will be piloted in facilities across all Saskatchewan health regions.

The training offered will cover topics such as how to perform risk assessments of work environments.

"Sometimes [it's] something as simple as how you set up your office space with a strategy to be able to exit safely, should an altercation erupt," said Cripps.

Bump in claims for police, corrections

While not accounting for as many accepted claims for workplace violence injuries as health care, the police and corrections industries both saw bumps in the number of accepted claims from 2012 to 2016.

McFadden said that may be because workers in those fields have become better at reporting when something happens."In talking to those industries, there has been increased education and training," she said. "Often when we see an increased level of awareness or education happening in any industry, we see an increase in reporting."